Lincoln and the Thirteenth Amendment 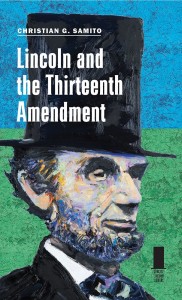 Lincoln and the Thirteenth Amendment

Read Christian’s introduction here, excerpts from his conclusion here,  and watch him talk about the book on C-SPAN here. Read a review of Christian’s book here.

Long before the Civil War, Abraham Lincoln recognized the challenge American slavery posed to the ideals of the Declaration of Independence. Bondage did more than endanger the principles imparted by the Founders; it challenged the very survival of the nation. A constitutional amendment would be the ideal solution to ending slavery, yet the idea of such an amendment conflicted with several of Lincoln’s long-held positions. In this study, Christian examines how Lincoln’s opposition to amending the Constitution shaped his political views before he became president, and how constitutional arguments overcame Lincoln’s objections, turning him into a supporter of the Thirteenth Amendment by 1864.

For most of his political career, Christian shows, Lincoln thought the Constitution should not be changed, even to overturn Supreme Court rulings with which he disagreed, like the Dred Scott decision. Moreover, well into his presidency, he argued that emancipation should take place only on the state level because the federal government had no jurisdiction to control slavery in the states. Christian traces Lincoln’s opposition to using constitutional amendments, examining how Lincoln addressed various amendment plans proposed as southern states started to secede. Between January 1863 and mid-1864, however, Lincoln grew to support a constitutional amendment to abolish slavery because it worked within the constitutional structure and preserved key components of American constitutionalism in the face of Radical Republican schemes. Through the Thirteenth Amendment, Lincoln could satisfy his moral, political, and wartime motives for ending slavery and remain faithful to the Constitution even while reforming it.

Christian chronicles how Lincoln made the amendment an issue in his 1864 re-election campaign, analyzes lobbying efforts to secure the congressional votes necessary to have the Thirteenth Amendment sent to the states for ratification, examines in detail the final vote in the House on the amendment resolution, and interrogates definitively various charges of corruption and backroom deals. He also considers the Thirteenth Amendment in the context of the Hampton Roads conference, Lincoln’s thoughts on the meaning of the amendment in his final days, and the use of Lincoln’s assassination to call for a robust reading of the amendment. Christian provides the authoritative historical treatment of a story so compelling it was recently dramatized in the movie Lincoln.

Closing with a lively discussion that applies the Thirteenth Amendment to current events, this concise yet comprehensive volume demonstrates how the constitutional change Lincoln helped bring about continues to be relevant today.

“Samito gives us the fullest account we have of Lincoln’s gradual embrace of a constitutional amendment abolishing slavery. The author understands, as few others have, Lincoln’s longstanding commitment to state-by-state abolition and how it evolved into a more radical push for the constitutional destruction of slavery everywhere in the United States. It’s hard to believe that no such book has been published before!”—James Oakes, author of Freedom National: The Destruction of Slavery in the United States

“In this splendid little book, Christian G. Samito surveys Lincoln’s eventual support of ending slavery by constitutional fiat. . . . [Samito’s] historical chops are beyond dispute and his writing about law is disarmingly simple. To be clear, I mean this last remark as a compliment—lawyers and legal scholars often confound simple issues and meet complex ones by retreating into professional obfuscation. Samito, however, is no pettifogger—he has a knack for making complicated ideas simple.” – H. Robert Baker, author of The Rescue of Joshua Glover: A Fugitive Slave, the Constitution, and the Coming of the Civil War

“Steven Spielberg’s Lincoln opened everyone’s eyes to the great significance of the Thirteenth Amendment. Now, in Lincoln and the Thirteenth Amendment, Christian G. Samito provides the backstory and analysis of Lincoln’s real role in the adoption of the amendment. In this brief, highly readable volume, Samito deftly weaves two central strands of Civil War history: Lincoln’s presidential leadership and the Constitution’s transformation. Readers looking for an overview of the path of emancipation during the Civil War will be well served by this superb book.”—Michael Vorenberg, author of Final Freedom: The Civil War, the Abolition of Slavery, and the Thirteenth Amendment

“The Thirteenth Amendment is the ‘liberty amendment’ of the Constitution we most take for granted. In this book, Christian Samito tells the fascinating and largely forgotten story of how Abraham Lincoln’s thinking about slavery and the Constitution gradually evolved to converge with the views of more radical Republicans. In this way, Lincoln’s evolution tracked that of the nation he led. Those who were intrigued by Spielberg’s film Lincoln will want to read what really happened.”—Randy E. Barnett, Carmack Waterhouse Professor of Legal Theory at Georgetown University Law Center and Director of the Georgetown Center for the Constitution

“Christian G. Samito sheds new light on how Lincoln came to support the Thirteenth Amendment and on the intricate maneuvers necessary to obtain its approval by Congress and ratification by the states. This is an essential account of Lincoln’s developing views and his political strategy as he moved from opposing the spread of slavery to securing its complete abolition.”—George Rutherglen, John Barbee Minor Distinguished Professor of Law at the University of Virginia. 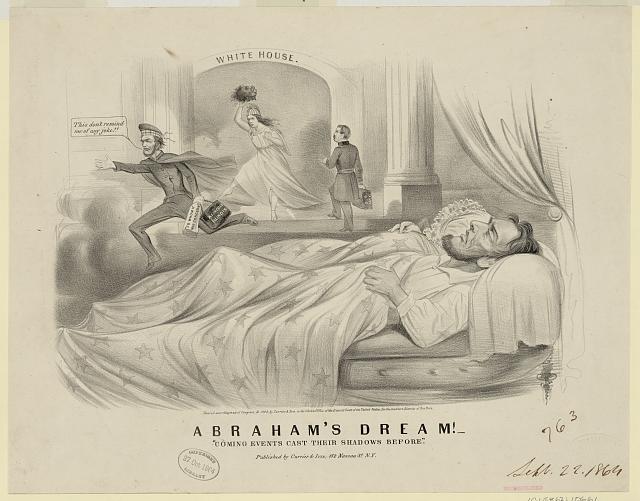 “Abraham’s dream!” Currier & Ives (probably drawn by Louis Maurer). Lincoln having a nightmare about the election of 1864: George B. McClellan enters the White House as Columbia kicks out the president, throwing at him the severed head of a black man. Lincoln exclaims, “This don’t remind me of any joke!!” and wears clothing meant to allude to his trip to Washington, D.C., as president-elect in 1861. Lincoln also carries his July 1864 “To Whom It May Concern” letter, in which he made the “abandonment of slavery” a prerequisite for ending the war. (1864) (Library of Congress)

“The True Issue or ‘That[’]s What[’]s the Matter’” Currier & Ives. An 1864 election cartoon in which Lincoln exclaims “No peace without Abolition!” and Confederate president Jefferson Davis insists, “No peace without Separation!” while George B. McClellan tries to stop them from tearing apart a map of the United States by asserting, “The Union must be preserved at all hazards!” (1864)(Library of Congress) 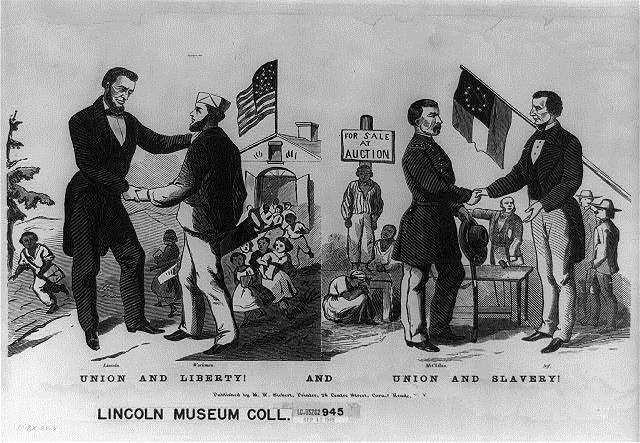 “Union and Liberty! And Union and Slavery!” M. W. Seibert. An 1864 election broadside contrasting Lincoln’s support for free labor, as he shakes the hand of a worker while black and white children exit a schoolhouse, with George B. McClellan’s tolerance for slavery, as he shake hands with Confederate president Davis in front of a slave auction. (1864) (Library of Congress) 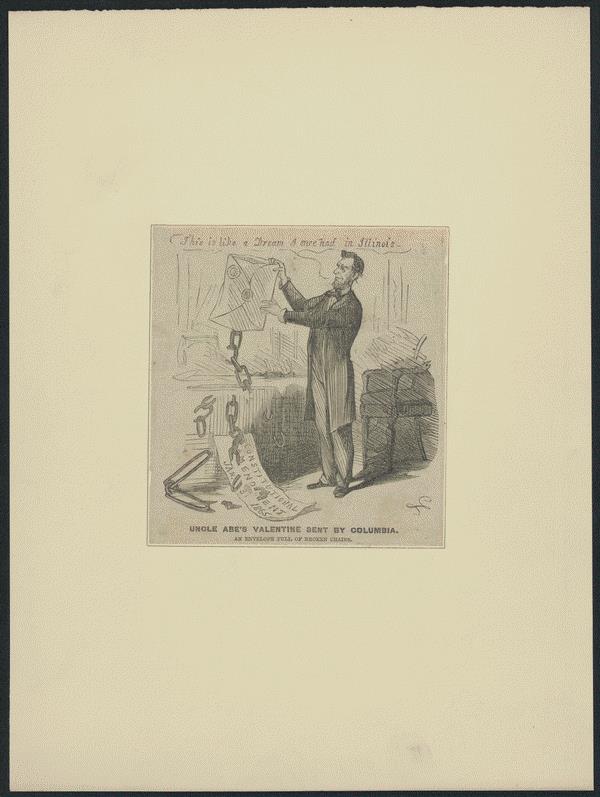 “Uncle Abe’s Valentine Sent by Columbia” in Frank Leslie’s Illustrated Newspaper, February 1865. Lincoln opening an envelope of broken chains with the passage of the Thirteenth Amendment. (Library of Congress) 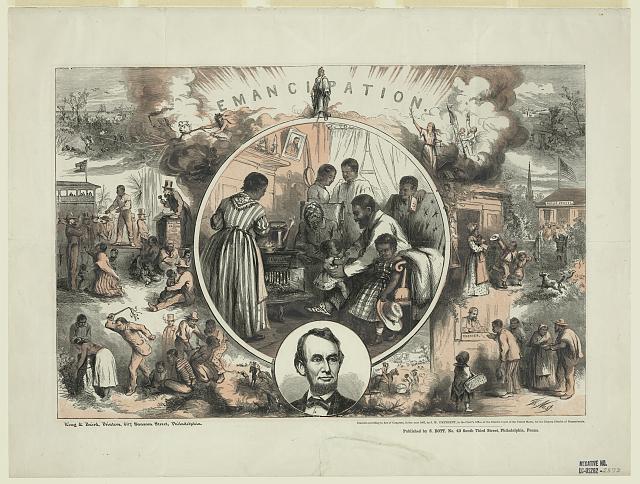 Thomas Nast, “Emancipation.” Thomas Nast’s contrast between slavery on the left, including scenes showing the hunting of fugitives, selling slaves at auction, and branding and flogging, and freedom on the right, including a black mother sending her child to school and a black man receiving his pay. (1865)
(Library of Congress)